Psoriasis is usually thought of as a skin disease and affects 2% of Americans.  Although it does have skin manifestations, it is really a chronic auto-immune disorder that starts under the skin and can also attack the joints causing psoriatic arthritis.  Although the cause is unknown, it is thought that the something triggers the immune system to react to skin cells to speed up their growth cycle.  Psoriasis usually has bouts of improvement and worsening, and can at times have complete remission.

There are 5 major types of skin psoriasis: plaque, guttate, inverse, pustular, and erythrodermic.  Plaque psoriasis is the most common form of psoriasis.  It is typically found on the knees, elbows, scalp and lower back.  The lesions typically are raised, red, and inflamed with silver scales.  It can also affect the nails causing pits and a yellow-brown discoloration and separation of the nail bed.  Guttate psoriasis is small, individual red spots usually found on the torso, arms, and legs.  Inverse psoriasis is usually found in the skin folds, such as the underarms, groin, and buttocks.  The lesions have a smooth bright red appearance and are shiny.  Pustular psoriasis is a white pus filled blisters surrounded by red skin.  Erythrodermic psoriasis is an inflammatory form that occurs on the majority if the body surface.  The skin surface is a fiery red that sheds scales.

There is not a cure for psoriasis, but there are many medications available to manage the symptoms, particularly for plaque psoriasis.  Treatment will vary from person to person, depending on the area and severity of the symptoms.  Topical creams and ointments are the first treatment option.  These medications include corticosteroids, Vitamin D analogs, retinoids, coal tar, and immunomodulators.  Ultraviolet light therapy can also be used, alone or in combination with other treatments.  For the most severe cases, oral or injectable medications may be used, including immunosuppressants  (Humira™, Remicade™, Enbrel™).  For more specific information on psoriasis and treatment options, consult your health care provider. 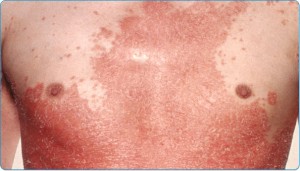